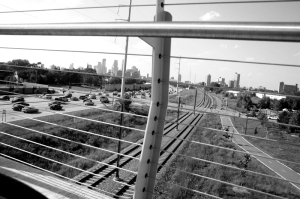 Thank you for calling Ring Ring Poetry. My name is Cole Sarar. This is the “last” poem of the scheduled Ring Ring Poetry series. Poems will continue to be available through the same phone number until the project runs out of funds or until I have a chance to put together a new project for the phone number (More Twin Cities poems from Twin Cities poets? A collaboration with a festival, or another set of artists? Some other, more technologically clever project?). But that’s all an upcoming post. Right now, let’s talk about this poem.

Over the course of this project I wrote a poem for each a library, a cemetery, a neighborhood, and a train station. Two in Minneapolis, two in Saint Paul. Two indoors, two outdoors. I put off deciding my last location for a long time, made lists of places I wanted to write poems about. One day, biking home from work, I stopped, not a quarter of the way home, knowing that I knew the answer. I did research, being a nerd, found out a lot about bridges, about trains, about trees. I tried to jam it all into a poem. It did not work. So I slept on it, woke in the morning, and asked myself what does it mean to be on a bridge- which lead me to the right poem, a poem I am very happy with, a poem I am especially happy to leave as the last poem of the scheduled series. It’s a good poem.

Things I learned but cut from the poem: three of my four favorite trees are kind of the same tree, the fourth tree is sort of “misnamed”. Our favorite Martin Olav Sabo Bridge is one of several built in the same style of a pedestrian bridge in Germany. If the angle of the bridge’s mast (which I guess is technically called a “tower”, but come on, Look At It) was just 2° different, it’d be the proper angle for one of the legs of an inverted, five-pointed star. People are working on all sorts of strange electronic noses, because human noses aren’t all that great. Things you will learn from the remaining poem: what it means to stand in the middle of a bridge with your eyes closed. Call 612 223-POEM. 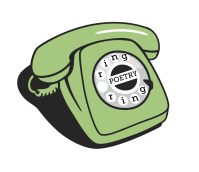