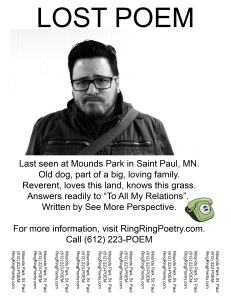 I’ve known Adam (See More Perspective) for a handful of years now, and it’s jaw-dropping how his creative work is deepening, crystalizing the expressions of his spirituality into something that is really tangible and relatable. I was really interested in having Adam’s voice involved in the project, seeing how he tackled the project, and was really impressed. Adam’s piece is worth experiencing in Mounds Park- the interaction is beautifully done and a lovely way to allow audiences to really  immerse and involve themselves in the poem. Even if you’re unable to visit Mounds Park, read up a little about it here and then call 612-223-POEM. -Cole

I’ve recently been announced as a semifinalist for the Forever Saint Paul Challenge for the “one million dollar idea” (!!!). I love Saint Paul (That doesn’t mean I don’t love Minneapolis, if you were wondering. The cities are twins and are bound together in time and fate). My idea has to do with art monuments that exemplify our rich cultural histories and how they’ve intertwined with what might sometimes seem like unlikely strands. The project would start by collecting oral histories of neighborhoods all around the city, going as far back into the story of the land and people as possible and finally, erecting a piece of art in a central location with that story and potentially some additional digital “extras”.

In a way, this poem begins that sort of thinking about a place. All that history, all those families and communities, are right here. History is not as far as it seems. It’s ubiquitous and vast of course, but it’s all right here. Right now. We cannot be separated from those that have come before us. Many that have come before us still live in homes we did not make for ourselves. My Saint Paul Challenge idea is about ownership, identity and perspective. I like to think this poem has something to offer in regards to those things.

There’s not a lot I can say about this poem that isn’t already in it, but there might be a few things not explicitly stated. When project designer/mastermind Cole asked me to contribute (and where I might write a poem from), I knew it was Mounds. Everything in that introduction is true. The gas station sandwiches, the dates and thunderstorms, BBQs, and all the rest. I’ve known this place for a long time. When I decided where to write about, I knew I had to dig. I couldn’t just write a piece about “how pretty it is” or how “it’s a special place for me”. I needed to mine every ounce of honesty that I could about this place. It goes in a lot of directions from there, but the rest is in the poem.

Speaking of how much I love Saint Paul, Minneapolis, and Minnesota over all, Today also marks the day of another new release. I’m right in the middle of releasing a new series of EPs that represent each of our four seasons. It started last year with ‘FALL FORWARD’, continued with ‘BRAIN FREEZE’ and is picking back up now with ‘FOOD FOR THAW’, which is being self released today, for free at www.seemoreperspective.com. Also be sure to check out “The Cosmos According to Your Closed Eyes”, a new full length album of spoken word poetry and music, coming out in September (and available for presale from me in person!)